Bolivian organizations call for ending the strike and resume work 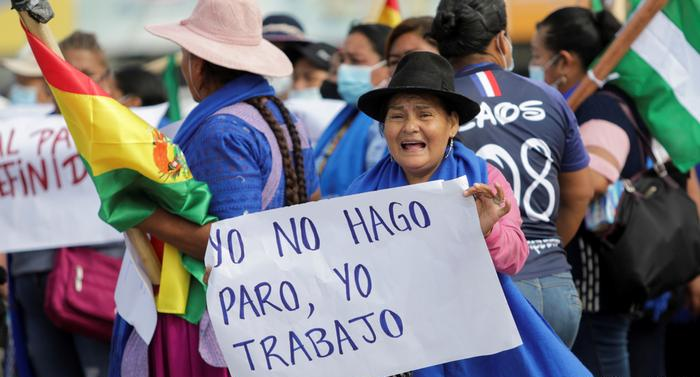 Bolivian organizations call for ending the strike and resume work

This Saturday, President Luis Arce announced the repeal of Law 1386 that establishes the national strategy to combat the legitimation of illicit profits and financing of terrorism, whose rejection was the center of the indefinite strike called by opponents that began on November 8.

The Chamber of Deputies of the Plurinational Legislative Assembly (parliament) will meet today at 18:00, local time, to discuss the repeal of said legislation.

Through a statement, the Federation of Municipal Associations of Bolivia called on sectors that have radical positions to put the interests of homeland first and not continue harming the economy of the people with new destabilizing processes.

“By repealing Law 1386, we recognize the value of prioritizing the greater good, the reconstruction of the economy and the social stability of the country,” he was quoted as saying by the Bolivian Information Agency. The Federation called on “the actors and sectors that have radical positions to put the interests of the homeland first, today nothing can justify any type of measure that continues to harm the work and the economy of the people,” he said.

For its part, the Trade Union Federation of Transporters November 16 of the department of Santa Cruz decided by resolution vote to return to their daily activities from this Tuesday and not abide by any more strikes.

Meanwhile, the executive of the Confederation of Trade Unions of Bolivia, Juan Carlos García, stated that this sector rejects the strike promoted by the Pro Santa Cruz Civic Committee and called for a “great march” in defense of the right to work on Wednesday. free movement.

On this day, the Bolivian Medical Confederation and the Beni departmental federation rejected the political mobilizations of some right-wing groups that seek to destabilize the democratically elected national government at the polls, and that hinder the confrontation with the fourth wave of the pandemic of the Covid-19.

The president of the Beni Medical Federation, Carlos Reyes regretted that some collegiate entities such as that of Santa Cruz persist with strikes and mobilizations and halt the anti-Covid vaccination campaign, daily care in health facilities, and are denied to the population receive quality care and warmth.

He described the mobilized sectors as “groups with political interests,” which have generated bad information, causing fear in the population, according to Bolivia TV. Likewise, the president of the National Chamber of Customs Agents, Antonio Rocha, argued that any restriction or stoppage of activities “tremendously” damages the country’s production and trade dynamics.

He explained to the weekly Encuentro Economico that the private productive sector “will always be the enemy of any paralysis of the economy” because its trade dynamics are active 365 days a year, from investment, logistics, transport, ports and customs .