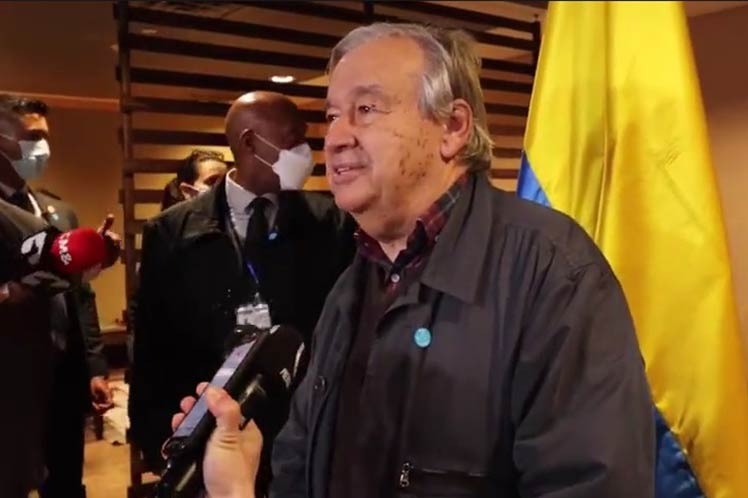 Bogota, Nov 23 (Prensa Latina) United Nations Secretary-General Antonio Guterres on Tuesday begins a visit to Colombia to participate in the commemoration of the 5th anniversary of the Peace Accord.

This is a visit of solidarity and tribute: solidarity with the Colombian people that today gives the world a very important example of affirming peace, the UN chief said after arriving in the country on Monday evening.

During his two-day visit, Guterres will meet with the Verification Mission, and representatives of the UN agencies, funds and programs present in Colombia.

Later, along with the country’s President Ivan Duque, the UN head will visit the former Territorial Area for Training and Reintegration in Llano Grande, in Dabeiba municipality, Antioquia department.

There, he will also meet with Rodrigo Londoño, President of Comunes political party and signatory of the Agreement, and then, he will travel to Apartado to learn about the progress of the Territorial Development Program, known by PDET, in that region of the country, and will attend an event in commemoration of the peace process.

The UN secretary-general will visit the “La Paz es Productiva” (Peace is Productive) fair in Bolivar Square and will participate in the commemoration of the 5th anniversary of the signing of the Final Peace Agreement to be held at the headquarters of the Special Jurisdiction for Peace, on Wednesday, November 24.

Upon his arrival on Monday evening, Guterres was welcomed by Colombia’s Vice-President and Minister of Foreign Affairs, Marta Lucia Ramirez, his Special Representative in Colombia, Carlos Ruiz, and Resident Coordinator, Mireia Villar Forner.