President of Cuba warns of threats posed by international situation 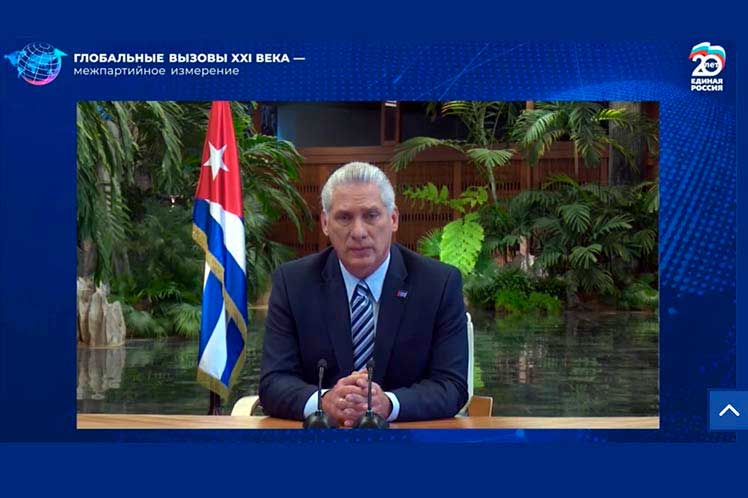 President of Cuba warns of threats posed by international situation

In his video message to the participants of the online meeting, the president warned that it is an indisputable reality that humanity faces a complex and unpredictable international scenario, shaken by a multidimensional crisis, a consequence of a prolonged and unjust global order.

Diaz-Canel expressed that this panorama, together with the impact of the Covid-19 pandemic, aggravated the problems and challenges that the world was already facing.

He denounced that, at the same time, the international community is witnessing a new aggressive escalation by the United States and its allies, determined to impose their global hegemony, with an increase in military spending, a growing threat to peace and the resurgence of actions and languages from the so-called Cold War and fascism.

“The struggle for domination and control of the planet’s natural resources is shifting, in all its harshness, towards other dimensions of virtual space, while the enormous polarization in the distribution of wealth, social inequality and global instability continues to deepen”, said the Cuban leader.

He expressed his opinion that the economic, social and financial crisis, which hits the least developed countries and the dispossessed majorities more severely, is reproducing itself, deepening inequalities and poverty.

Díaz-Canel drew attention to the increase in uncontrolled migration flows, international terrorism, and regional and international conflicts. “Language loaded with threats, a policy of sanctions and unilateral coercive measures, open-minded interference and double standards are imposed, without the slightest scruples,” he said.

“It is pertinent and necessary to energetically reject here interference in the internal affairs of Russia and other States. Those acts that threaten independence and national sovereignty and violate international law and the Charter of the United Nations must cease,” said the leader.