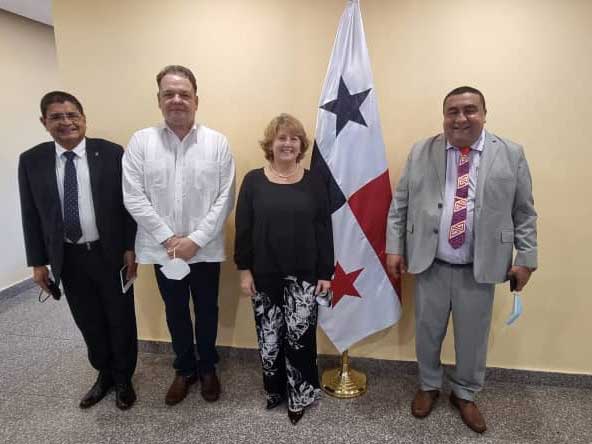 As indicated on the Twitter social network by diplomatic sources of the Antillean nation, during the fraternal dialogue in this capital, both parties expressed their interest in consolidating these exchanges and reviewed areas of bilateral collaboration.

Alemán, who also chairs the Platform for Interreligious Dialogue in Cuba and the Cabildo Quisicuaba Sociocultural Project, thanked the opportunity to continue previous meetings and updated his hosts about the situation in the largest of the Antilles in the confrontation with Covid-19.

He also expanded on the effects of the economic, commercial and financial blockade imposed by the United States on Cuba for over six decades, a hostile policy intensified by the last two administrations in the midst of the pandemic.

He also highlighted the achievements of science in his country that have allowed the production of its own vaccines to combat the disease.

Esquivel was accompanied by deputy Bernardino González, also a member of the Parliamentary Friendship group.

On the Cuban side, the ambassador to the isthmus, Lidya Margarita González, and the Counselor, Norberto Escalona, ​​attended the meeting, according to the note.

Quisicuaba is a community religious project dedicated to social assistance in various locations on the Island with relevant results in care for sectors such as health.

Its official site highlights that the initiative is based on the work of reintegration of people who have served sentences and support for their families; as well as aptitude transformation workshops with children and adolescents in conflict situations.

In addition, they devote efforts to a communication program for alcoholics and single mothers.

Enabling human improvement based on spirituality and as part of the tradition and permanence of Cuban identity is part of the work of that institution.