Díaz-Canel deepens in the internal functioning of Cuban PCC (+ Photo) 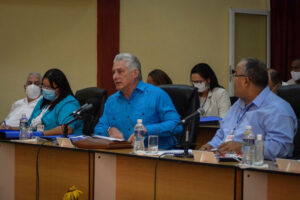 Díaz-Canel deepens in the internal functioning of Cuban PCC (+ Photo)

During the PCC balance assembly in that territory, the also president of the Republic warned that “when people finds its symbols obsolete, cultural and neoliberal colonization takes on.”

In this regard, the director of the birthplace of Carlos Manuel de Céspedes, Javier Vega, stressed that learning to love the connection between the cognitive and affective is vital to sow a passion for history in new generations, for which there are very attractive ways for their teaching and learning.

According to the profile of the Presidency on Twitter, the Cuban president expressed that based on the understanding of the complexity produced by the confluence of the blockade with the pandemic and media aggressiveness, “we have to ask ourselves what role corresponds to the PCC.”

Regarding the functioning of the political organization, the party leader urged that “the core meetings should excite and be important not only for the militants” but also bring these exchanges to the young people and the rest of the workers.

Similarly, he deepened that the core of the PCC should be the space for the communist family to discuss everything, without avoiding any issue; because if that meeting is innovative, we would be contributing more to the solutions of our problems.

For her part, the delegate to the appointment, pediatrician Ileana Licea, referred to the need not to lose tenderness or sensitivity towards the other, no matter how hard times are, to which she added that her furrow is in the Hospital , where he sows life and thanks to the Revolution.

The PCC balance assembly in Granma was attended by 219 delegates from the territory, representing all economic sectors and services.

This was the eighth partisan meeting in the provinces to be held in the country, after those held in Pinar del Río, Artemisa, Villa Clara, Cienfuegos, Matanzas, Sancti Spíritus and Ciego de Ávila.