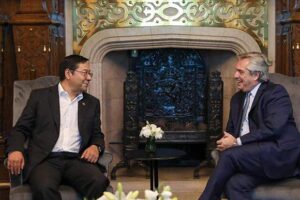 After a meeting at the Casa Rosada, the leaders issued a joint statement and participated in the signing of a Cooperation Memorandum of Understanding between the Ministry of Hydrocarbons of Bolivia and the Ministry of Science, Technology and Innovation of this country for the Integration in Evaporitic Resources and Lithium.

In a press conference, Fernández and Arce stated that Bolivia will continue supplying the natural gas that Argentina requires for its development and assumes the commitment to prioritize this nation in case it is possible for Bolivia can increase its production.

The contract that was in force is maintained and we celebrate having that security. Bolivia tries to recover the gas production affected by the lack of investment during the de facto government of Jeanine Áñez (2019-2020). We look forward to this increase arriving as soon as possible, said the Argentine president.

On the other hand, Fernández expressed his wishes that the two States and all of Latin America continue to advance in strengthening integration and recovering democratic values ​​and development in favor of the poorest.

While the government was usurped by the self-styled president Áñez (after the coup against Evo Morales in 2019) we had no link with Bolivia. We recovered contacts with the arrival of Arce. We knew that the people had the right to elect their leaders and that materialized with the 2020 elections, he pointed out.

The effort of Bolivians to recover the institutional framework and the full validity of rights should serve as a guide for all, he added.

Likewise, he urged the region not to allow similar events to be repeated, to work to recover unity and repair the damage caused by the administration of former US President Donald Trump.

Latin America has to rethink how to move forward because we live in the most unequal continent in the world and we cannot rest easy with that, he stated.

On his side, Arce assured his country intends to continue advancing and building the great homeland. When there are needs we have to help each other as what we are: brotherly peoples.

We comply with Fernández’s invitation to seal agreements and we want to go further. We intend to coordinate with Argentina and other States agreements for the commercialization of lithium and other important aspects, he indicated.

In addition, he thanked Argentina for having welcomed Bolivian leaders persecuted after the coup.