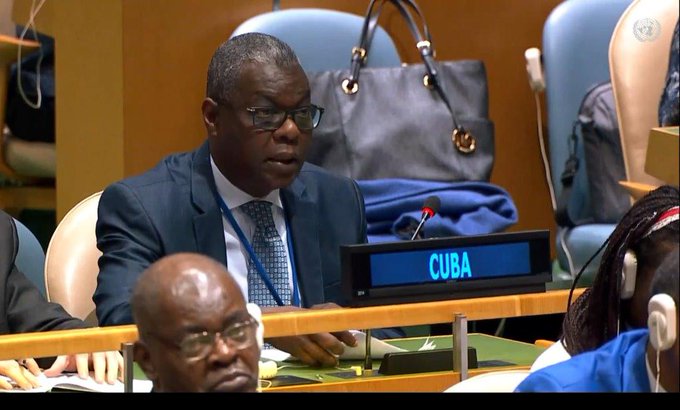 The permanent representative of the Caribbean country to the United Nations, Pedro Luis Pedroso, explained to the General Assembly the reasons why he voted against the resolution approved this Thursday that suspends Moscow’s rights in the Human Rights Council.

In this regard, he questioned the suspension mechanism in that Council, which has no parallel in any other UN body.

As the ambassador pointed out, such a mechanism is easily used selectively: today it is Russia, tomorrow it can be anyone, particularly nations of the South that do not bow to the interests of domination and defend their independence.

“It was no coincidence that the most enthusiastic promoters of the membership suspension clause, when the construction of the new Human Rights Council was being negotiated, were developed nations with a demonstrated trend to accuse countries of the South that do not conform to their supposed models of democracy”.

Those same developed nations remained complicit in silence in the face of human rights violations in Western countries, Pedroso added.

Washington has caused the death of hundreds of thousands of civilians, which it calls “collateral damage”, also the displacement of millions of people and vast destruction throughout the geography of the planet, but this Assembly has never suspended any of their rights, he stressed.

Could the General Assembly one day approve a resolution to suspend the membership of the United States in the Human Rights Council? questioned the Cuban ambassador.

This has not happened and it seems that it will not happen despite their flagrant and massive violations of human rights as a result of invasions and predatory wars against sovereign countries, based on their geopolitical interests, he lamented.

Nor will the suspension clause be applied against the State that maintains against Cuba, for more than 60 years, a criminal blockade that is the most prolonged, flagrant, massive and systematic violation of human rights of a people and a true act of genocide against an entire nation, stressed Pedroso.

The country that opposed the establishment of the Human Rights Council and requested the vote against the resolution that created it, activated at its convenience now, as it did in 2011 against Libya, one of the most controversial clauses of that forum, he said in reference to the United States.

Cuba opposed this membership suspension clause because it could be used by those who prioritize selectivity in their approaches and politicize such issues, the ambassador insisted.

In this sense, he criticized that a number much smaller than the number of nations that voted for the inclusion of a State in that Council, can then decide to expel it.

Russia was elected to the Human Rights Council in 2020 with 158 votes, and now the resolution that suspended its rights received the support of 93 member countries.