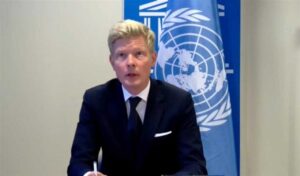 This is the first nationwide suspension of fighting in Yemen in the last six years, the UN special envoy said, according to a communique released by his office.

The population has suffered unimaginable losses due to this conflict, which marked all aspects of daily life, from shortages in the markets to the bad conditions of roads, schools, hospitals and homes, the official stressed.

Faced with this situation, Grundberg urged building a path to peace on the cessation of hostilities, which is, he said, a shared responsibility of the warring parties, the region’s countries, the United Nations and the international community.

The UN representative assured that most of Yemenis are united in their desire to maintain and consolidate the truce as a way to reach peace.

The agreement came into force on Saturday, following negotiations led by Grundberg.

The war in Yemen began in 2014, when rebels took up arms and occupied large swathes of the country, including Sana’a, its capital.

According to the office of the United Nations High Commissioner for Refugees, two-thirds of the population, some 20 million people, need humanitarian assistance and 80 percent live below the poverty line.