Evaluation of socioeconomic programs’ progress in the capital 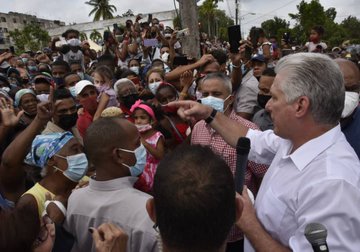 Evaluation of socioeconomic programs’ progress in the capital

Through tours, which began the day before, leaders verified in the 15 municipalities of the capital the implementation of approved policies to promote development in the communities.

According to the Twitter profile of the Presidency, the authorities visited 175 economic and social objectives, and spoke with more than 4,300 neighbors.

According to the source, of the 83 indications left by the 2020 visit, six are in process of being implemented and the rest have been fulfilled.

The governor of Havana, Reinaldo García, reported at the end of the meeting that the completed instructions are fundamentally associated with the areas of hydraulic resources, construction, investments and information technology.

García mentioned among the work priorities the confrontation with Covid-19, the increase in food production, the promotion of the housing program, sustainability in actions to transform neighborhoods, and the improvement of the business sector.

On this day, President Díaz-Canel also attended the Enrique José Varona University of Pedagogical Sciences, where the creation of a Pedagogical Theme Park is finalized to promote innovation in the sector and generalize experiences to other educational communities.

Today’s work agenda included a tour of the Prime Minister, Manuel Marrero, through the municipality of Habana del Este, in which he analyzed the implementation of the territory’s Economic-Social Development Strategy.

Vice president, Salvador Valdés, as well as deputy prime ministers, holders of various portfolios and other members of the government also visited places of interest in the city.