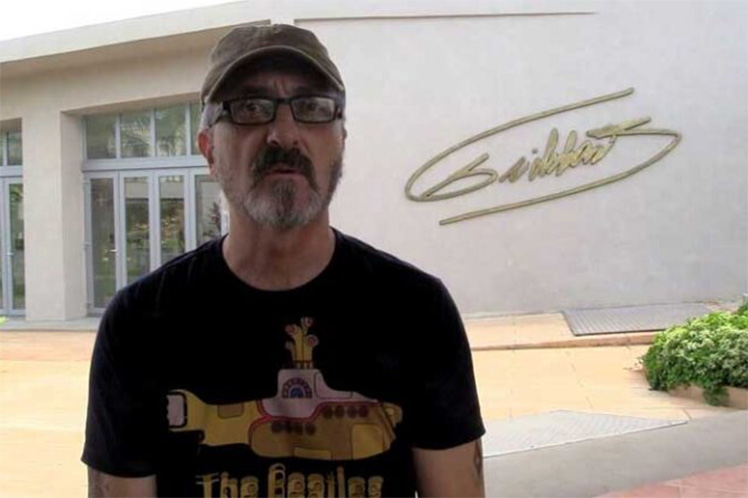 Although the country was going through an acute economic crisis, popularly known as the Special Period, from the first day he considered Cuba “my place in the world”, he lived for several years in the Havana neighborhood of Nuevo Vedado and worked for various media outlets in the area.

As part of his work, Vidal found Fidel in some official coverage; however, he particularly remembers the Ibero-American Summit of Heads of State and Government, held in Havana on November 15-16, 1999.

On that occasion, after a “raffle” of credentials, he went to the Palace of the Revolution for dinner with the guest presidents. During the welcoming ceremony for the regional leaders, Fidel greeted the journalists accredited to the meeting.

“I apologized because at that time Carlos Menem, who was ruling Argentina, was one of the allies of the United States in the attempt to boycott the summit, along with Nicaraguan President Arnoldo Aleman. Fidel, with his characteristic humor, tells me that with my presence the Argentineans could not be better represented,” he confessed.

During an interview with Prensa Latina, Vidal revealed that on that occasion, the leader of the Cuban Revolution signed a 20-peso bill for him, a snapshot taken by Liborio Noval and immortalized on the flap of his most recent book ” Fidel como un colibri” (Fidel as a Hummingbird”, with a prologue by singer-songwriter Silvio Rodriguez.

Vidal appreciated a bond of great sympathy and a special chemistry in the subsequent meetings, even the Commander in Chief gave him exclusive information or talked with him for several hours, as happened after the closing speech at the 10th Sao Paulo Forum, held in Havana from December 4 to 7.

“He was talking about wines and I intervened several times. Then he explains to me that he had to go because he had dinner with four journalists,”

Vidal also participated in that meeting and that conversation became the aforementioned work, whose title recalls the text “El colibri” (The Hummingbird) by Eduardo Galeano.

“Dinner” began at six in the morning and ended at two in the afternoon; The Argentinean writer only had a cassette for that conversation, although he knew that the meetings with Fidel were not brief or silent, it was then that the waiter included some magnetic tapes in his service.

Of that talk, the Cuban statesman kept the recording. “He liked to talk, but also to ask and that was a challenge for the interlocutor because one had to be sure of the answer. We talked, among other topics, about the guerrilla war in Sierra Maestra and his personal life,” he said.

According to the author of “Humo azul” (Blue Smoke), the then president showed a vast knowledge of world history, geography and geopolitics and also knew the daily life of Cubans and the details of day to day. Some ideas expressed on that occasion appeared in the media at the time.

After Fidel’s death on November 25, 2016, he and Nuestra America publishing house prepared commemorative agendas based on that interview with the inclusion of images by Roberto Chile and the transcription of Diany Santa Cruz, at that time Telesur correspondent in Caracas, Venezuela.

“He was one of those historic and political figures that any journalist would like to interview. It was fascinating to talk with him and at the same time a challenge. When he died, I cried as if he had been someone in my family and I lamented the closure of a cycle related to his figure and the Cuban Revolution,” he said.

Vidal said that Fidel was human, sensitive and receptive, and considered that the Fidel Castro Ruz Center, located in El Vedado, is a space to make his spirit and presence visible, “the same happens in the streets, we feel his absence, but his teachings are still alive.”