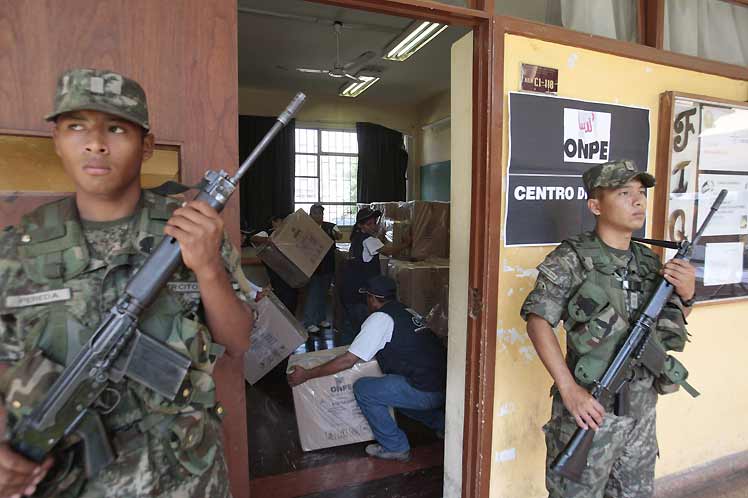 Such certainty emerges from the dispersion of the electorate among several of the 18 candidates who share meager percentages of citizen preferences, which rules out the possibility of a winner in the first round, who achieves the requirement of obtaining half plus one of the votes.

The latest confidential poll, accessed by the foreign press in the evening, places the leftist Pedro Castillo and the neo-liberal Hernando de Soto in first and second position, closely followed by the populist Yonhy Lescano, the extreme right-winger Rafael Lopez Aliaga and the progressive Veronika Mendoza.

However, the differences between one and the other are so narrow and the electorate so changeable, that pollsters consider it very possible that the outcome will be different.

The tension prior to Election Day had among its ingredients insinuations by candidate Lopez Aliaga about a likely fraud, which the president of the National Jury of Elections, Jorge Salas, ruled out, without naming the candidate.

In that context, over 12,000 polling stations were installed with a deployment of more than 150,000 police and military officers, who spent the night guarding the headquarters and the electoral material.

The day registers fears for the possibility of a high absenteeism for fear of Covid-19 infection, which yesterday registered a record of 384 deaths in one day and 10,655 new Covid-19 cases.

In addition, three presidential candidates – former soccer player George Forsyth, environmentalist Marco Arana and populist Jose Vega – will not be able to vote because they have caught the novel coronavirus and are in house isolation.

Earlier, the center-right Julio Guzman, the leftist Castillo and the indigenist Ciro Galvez were infected with the SARS-CoV-2 coronavirus, which causes Covid-19.