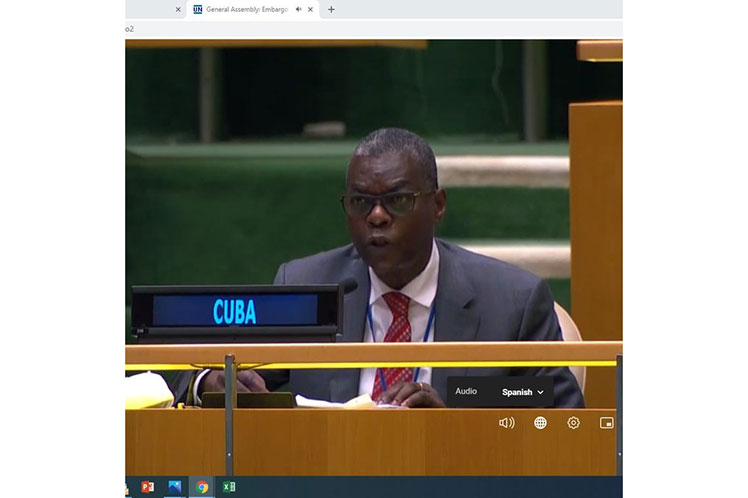 When exercising his right to reply at the UN General Assembly (UNGA) to statements issued by US representation, the Pedro Luis Pedroso set out Cuba´s achievements regarding human rights.

Pedroso disavowed false allegations made by the US delegation, and made it clear that Cuba will not ask Washington for permission to build up the economic, political and social system sovereignly decided by its people.

Cuba has enough reasons to be proud of the human rights. We have progressed in this matter despite the blockade it is currently facing with insurmountable dignity and which was strongly rejected at UNGA, Pedroso stressed.

Meanwhile, the Cuban diplomat recalled that the United States is a nation where healthcare has exclusive prices.

In addition, he continued, the US government confines thousands of migrant children (separate from their parents) at detention centers.

Women in the United States receive, as a rule, lower wages than men for equal work, said Pedroso.

On Wednesday, UNGA adopted with the support of 184 member states a new resolution calling for the end of the blockade imposed by Washington on Cuba.

Ukraine, Colombia and Brazil abstained and only the United States and Israel voted in favor of the blockade. Both nations were isolated before the claim of most of the international community.

For the twenty-ninth time since 1992, all countries categorically called for ending the US blockade imposed on Cuba for over 60 years.

Once again, the United States brushed aside the calls of the international community, defending its economic, commercial and financial blockade against Cuba.

The US representation to UNGA stated that the United States once anew supports the blockade under the pretext of being ‘a tool to promote democracy and respect for human rights.’

At UNGA, where dozens of international delegations called to lift the blockade that stifles the Caribbean nation, the US government considered that this hostile policy is ‘in favor of the Cuban people,’ while data shows otherwise.