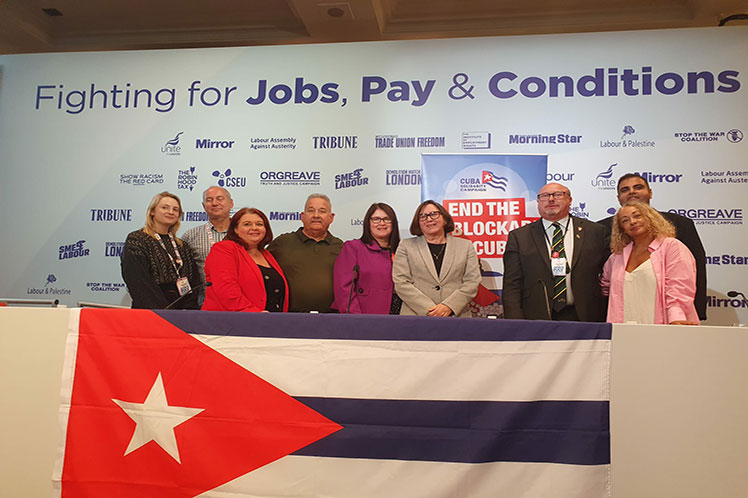 We are internationalists; we believe in solidarity, stressed the Labor lawmaker Grahame Morris at the event held in the coastal city of Brighton, and in presence of Cuba’s Ambassador to UK Barbara Montalvo.

Morris, who chairs the Multiparty Group on Cuba in the British Parliament, pointed out that it is now more important than ever to make the world aware of Cuban people´s situation due to the double impact of the US blockade and the Covid-19 pandemic.

The major cause of shortage of food, medicine and fuel is the cumulative effect of the cruel and unjustified blockade imposed by the United States, he said.

Mr. Morris recalled this unilateral measure was tightened by former President Donald Trump, with more than 200 sanctions, and that current President Joe Biden has done nothing to reverse them despite his campaign promises.

In this regard, Morris recalled the calls made by British parliamentarians, Europeans and US congressmen to Joe Biden to reverse at least some of measures imposed by Trump, and how unnecessary damage and suffering is causing to the Cuban people amid the Covid-19 pandemic.

If the US government really wants to help the Cuban people, the first thing it should do is to reverse its sanctions, to normalize relations with Cuba and put an end to the hostile blockade that is totally unjustified, he reiterated.

The Director of the Campaign for Solidarity with Cuba (CSC) Rob Miller condemned the extraterritorial nature of the US blockade that makes it difficult to roll out financial transactions even outside the United States to buy medicines and supplies with money collected among British activists.

Nothing has changed under Biden, said Miller, who called for countering Washington’s growing hostility toward Cuba with more solidarity.

The Cuban ambassador thanked, on the other hand, the constant support by Britain parliamentarians and CSC members, and their contributions for clinical trials of the anti-Covid-19 vaccines developed by Cuban scientists.

Mentioning the efforts Cuba is currently doing to fight the pandemic and save lives, Montalvo stressed that the Joe Biden administration has not given a single sign of trying to ease his genocidal policy.