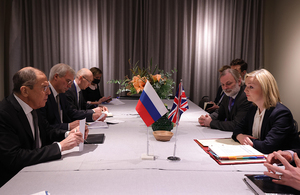 Lavrov expressed in Swedish city of Stockholm, where the meeting takes place, that the OSCE became hostage to bloc discipline within the framework of the European Union and the North Atlantic Treaty Organization (NATO) and got stuck on mean and narrow issues.

“There is no progress in solving key tasks facing our organization: strengthening security based on cooperation, not confrontation”, he said.

However, he also stressed that the main objective of building an equal, comprehensive and indivisible security community remains in force.

Lavrov denounced that Western countries are striving to replace international law with so-called rule-based order, which they establish based on own priorities, according to the local Foreign Ministry’s official website.

“More and more we hear voices calling for breaking the rule of consensus, without which our organization will lose its uniqueness and value as a platform for equitable interaction of all members”, the Russian official said.

He assured that these new methods will not work if a group of countries place themselves above others and apply pressure measures and unfair competition to those who do not agree. He put as examples the “vaccine diplomacy”, the fake news campaigns and the illegal sanctions.

The Russian minister emphasized that the supposed liberal values ​​are used to justify interference in the internal affairs of sovereign states.

“Briefly, a black and white model of bipolar confrontation is being reproduced on a new political and ideological basis”, he said.

According to Lavrov, the fall of the Berlin Wall marked the end of the Cold War and the confrontation between the two systems, however, he pointed out, nowadays those who proclaimed themselves as civilized democracies are building new walls and consider their missionary task to contain those who they labelled as authoritarian regimes.