Cuba calls on the UN to address the roots of racism 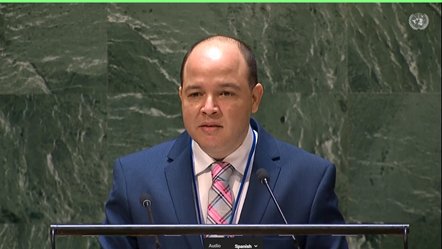 Cuba calls on the UN to address the roots of racism

Speaking at a session of the United Nations General Assembly on the occasion of the International Day of Commemoration of the Victims of Slavery and the Transatlantic Slave Trade, Cuban ambassador Yusnier Romero also recalled the deep imprint of these people on the island.

Today’s tribute also acquires particular importance in the face of alarming manifestations of racism, racial discrimination, xenophobia in some of the world’s most developed societies, Romero warned.

“We will never forget that around 1,300,000 African slaves arrived in Cuba by force to replace the indigenous population exterminated by Spanish colonialism as labor.”

By remembering the victims of slavery and the transatlantic slave trade, we Cubans also pay tribute to the roots of our people, he stressed.

“Our nation, culture, idiosyncrasy and popular religiosity are profoundly mestizo and could not be explained without the African contribution,” recalled the ambassador.

Likewise, the diplomat continued, the struggles for independence and self-determination in the largest of the Antilles could not be understood without the decisive contribution of the freed slaves and their descendants.

As a rule, Romero observed, those of us who were a colony yesterday are now subject to an unjust international order, which has changed its name, but not its essence, and continues to promote the wealth of a few at the expense of the poverty of the majority.

Developed countries are beneficiaries of conquest, colonization, slavery and the transatlantic trade; therefore, they are responsible for the extermination associated with them, he stressed.

At this time, full reparation and compensation to the peoples and groups affected by the horrendous crime of slavery is a moral duty, he emphasized.

Faced with this panorama, he pointed out, Cuba has continued to strengthen its international cooperation programs in the area of ​​health, mainly with countries and territories of the Caribbean, Latin America and Africa, despite the unprecedented intensification of the economic, commercial and financial blockade imposed by the United States against my country.

The UN General Assembly’s plenary session this Tuesday marks the International Day of Commemoration of the Victims of Slavery and the Transatlantic Slave Trade, a date celebrated on March 25.