First round of presidential elections begins in France 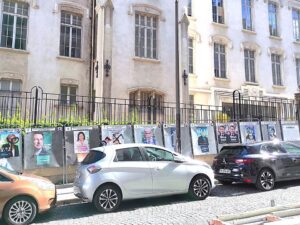 First round of presidential elections begins in France

As occurred on Saturday, the electoral silence, which results in prohibiting to disseminate propaganda and divulging surveys, programs and interviews with the candidates to the Elysée Palace is in force on Sunday, although the media can cover the moment when politicians cast their votes.

The polls conducted until Friday unanimously reflected that President Emmanuel Macron and far-right leader Marine Le Pen are the favorite candidates for the April 24 runoff, a forecast that if it is confirmed today, it would repeat the runoff duel of five years ago.

Jean-Luc Mélenchon, leader of La France Insoumise, closed the campaign in the third place, although also with options to advance in the return to the polls in two weeks, while far-right candidate Éric Zemmour and conservative right-wing politician Valérie Pécresse seem without chances, after coming second in the opinion polls to the contest.

In view of the continuing impact of Covid-19, a pandemic that has reemerged in France since mid-March, the elections are taking place under sanitary measures, including the disinfection of the premises used for voting.