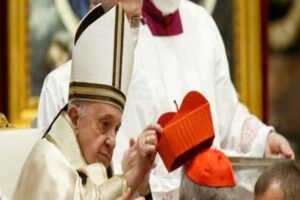 Rome, Aug 27 (Prensa Latina) Pope Francis ordained today during the eighth consistory of his pontificate, 20 new cardinals, four of them from Latin America.

During the ceremony at the Basilica of San Pedro, in the Vatican, the Supreme Pontiff imposed the red cap on Monsignor Adalberto Martínez Flores, Metropolitan Archbishop of Asunción, in Paraguay, the first cardinal in the history of that nation.

Robert W. McElroy, Bishop of San Diego, the United States, received the red cap, while Jean-Marc Avelin, Archbishop of Marseille, was ordained from Europe, as well as Italians Oscar Cantoni, Bishop of Como and Arrigo Miglio, Archbishop Emeritus of Cagliari.

The youngest member of the College of Cardinals will be Giorgio Marengo, 48, a Consolata missionary and apostolic prefect of Ulan Bator, the capital of Mongolia.

Francis pronounced the formula for the creation of the cardinals, including 16 under eighty years of age, who may therefore be electors in a future conclave.

These swore fidelity and obedience to the Pope and his successors, after which they were given the red skullcap, mortarboard, ring, as well as the bull with the assignment of the title.

On Tuesday, August 30, the highest representative of the Catholic Church will preside, in the Vatican Basilica, at the Eucharistic celebration with the new cardinals and the College of Cardinals.